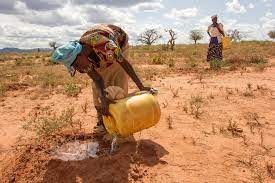 Samiya Ahmed in Beledweyne district in southern Somalia tells a chilling story of how the cruel hand of nature has reaped everything and relegated her to destitution. She sits and watches desperately at the sunken eyes of her starving three-year old baby. “I have nothing to give her. We have lost all our animals and I do not know how long she can hold on”, Samiya says, with teary eyes. Her story is not isolated.

Somalia has again crowded the global news headlines with reports of its worst drought crisis in a decade. Millions of people are going hungry and many are being forced to leave their homes in search of food and water. The conflict-shattered country in the Horn of Africa ranks among the world’s most vulnerable nations to climate change. Somalia has experienced three severe drought crises in the past decade, beginning in 2011, 2016 and 2021. Neighbouring Ethiopia is in a similar predicament, with a prolonged drought, affecting 6.8 million people living in Oromia, SNNP, Southwest and Somali. According to reports, the water quality in these areas is extremely poor and saturated with salt, yet the camels and their owners have got no choice but to drink it. Not only is water harder to find than before, the drought has also shriveled the landscape, making scarce the grass, shrubs and browsing trees that camels and other animals feed on.

In Kenya, the situation is not different. The shortage of water has led to scarcity of pastures, which has killed a lot of livestock in the Turkana, Wajir, Garissa, Isiolo, Mandera and Marsabit areas. Intercommunal conflicts have intensified over the available meagre resources for humans and livestock. Much as some people continue to cultivate and prepare their gardens in the hope of getting rain, the skies remain clear and the clouds elusive. Mothers are being forced to walk long distances in search of food, water and firewood to ensure that their babies do not die. Reports indicate that some desperate mothers have opted to give away their babies rather than watch them perish in their arms.

“The ultimate culprit is climate change,” Mohamud Mohamed Hassan, Save the Children’s country director in Somalia, said in a statement. In his opinion, human actions have led to disastrous loss of biodiversity, endangering the interconnected ecosystems of the planet. It has been globally accepted that the failed balance between industrial development and human survival has led to the devastation of a harmonious co-existence with nature. This has resulted in endless crises including extreme weather, food and settlement crisis, pandemics, abject poverty, inequalities and armed conflict.

Climate change disproportionately affects the most vulnerable social groups, particularly women and girls, whose designated gender roles of providing food for the family, fetching water and firewood, leaves them heavily exposed to the vulgarity of nature. In hostile climate environment, the risk of Gender Based Violence (GBV) and sexual assault against women and girls is exacerbated. Their health, food security, and livelihood are all compromised.

In the aftermath of the COVID-19 pandemic, critical constraints to gender-equitable climate action continue to persist and have worsened. With the deeply entrenched gender roles and reduced access to natural resources, women and girls are more exposed to climate risks and yet they are less empowered to take forward solutions due to legal and economic insecurity. It is anticipated that as climate change progresses, more pandemics are likely to worsen in occurrence and severity. Women and girls, who have less or no access to social safety nets, including health care, job security, finance, or unemployment benefits are likely to be most affected by such pandemics.

Surprisingly the solution to climate change lies with women. Various studies indicate a strong direct linkage between the under-representation of women in decision-making bodies and the lack of appropriate solutions to greenhouse gas reduction. The shortage of women in governance and public policy-making bodies has seriously undermined the effectiveness of climate change mitigation measures, which require the involvement of all stakeholders. It is undisputable that because of their proximity with nature, they are critical agents of change and the bearers of solutions to climate justice. Their knowledge about nature and the social networks they possess, provides them an advantage at the frontline of climate change adaptation strategies. They have also got thorough knowledge of the environment, playing a leading role in defending, preserving and protecting it. But unfortunately, scientists and policy experts in climate change research and policy solutions have continued to undervalue and disregard this irreplaceable resource.

The Coalition on Feminist Action for Climate Justice, which was launched at the Generation Equality Forum (GEF) in Paris in July 2021, has developed a Global acceleration plan to drive progress in the attainment of climate and environmental justice. This will be done by channeling increased political, financial and advocacy support towards the strengthening of women’s and girls’ agency and leadership in the green economy. In so doing, their resilience to climate impacts will be enhanced and the rights of rural, grassroots and indigenous women and girls, as critical actors in the fight against climate change will be defended.

For feminist and women’s organisations, this is a great opportunity to accelerate the momentum for climate action in Eastern and the Horn of Africa. Working closely with the Intergovernmental Authority on Development (IGAD) and the East African Community (EAC), countries in the region should take up the lead of the GEF Coalition on Feminist Action for Climate Justice to create more gender and climate-equitable economic and political systems. With increased advocacy, political and financial support towards strengthening women and girls’ agency and leadership in the green economy, their resilience to climate impacts, and defence of the rights of rural, grassroots and indigenous women and girls in the fight against climate change will be enhanced.

The Coalition on Feminist Action for Climate Justice has noted the need for improvements in women’s land rights and security of tenure and the recognition and redistribution of unpaid climate work. Despite women being responsible for agricultural production and countries in the Eastern and Horn of Africa having various legal and policy instruments, negative customary values and practices continue to determine who can access and use crucial natural resources, such as land and forest products.

The Coalition has also called for international climate governance to integrate an intersectional and inclusive approach in understanding and responding to the challenges faced by women and girls in their full diversity. With their mandate to address drought and desertification, regional bodies like IGAD and the EAC, should join hands with other global leaders to implement the Global Acceleration Plan on Feminist Action for Climate Justice. Discussions on climate justice should deliberately include gender, racial and economic justice and respect the consultation with indigenous peoples and communities in order to obtain free, prior and informed consent.

Feminist Call to IGAD and the EAC for Climate Justice
1. Increase the proportion of women and girls in decision-making and leadership positions in environmental governance and sectors relevant for transitioning to an inclusive and regenerative green economy.
2. Women and girls should equitably and meaningfully participate in decision-making processes at all levels, including the alignment of key climate policy instruments with national development plans and developing climate responses.
3. There should be recognition of the interconnectedness of climate change with issues of gender justice and protection and augmentation of the voices of grassroots and indigenous communities, including frontline defenders, across social and political arenas.
4. Women and girls should equitably access climate finance, technologies and knowledge, and access and control natural resources for management and protection, including secured land rights and ownership.o