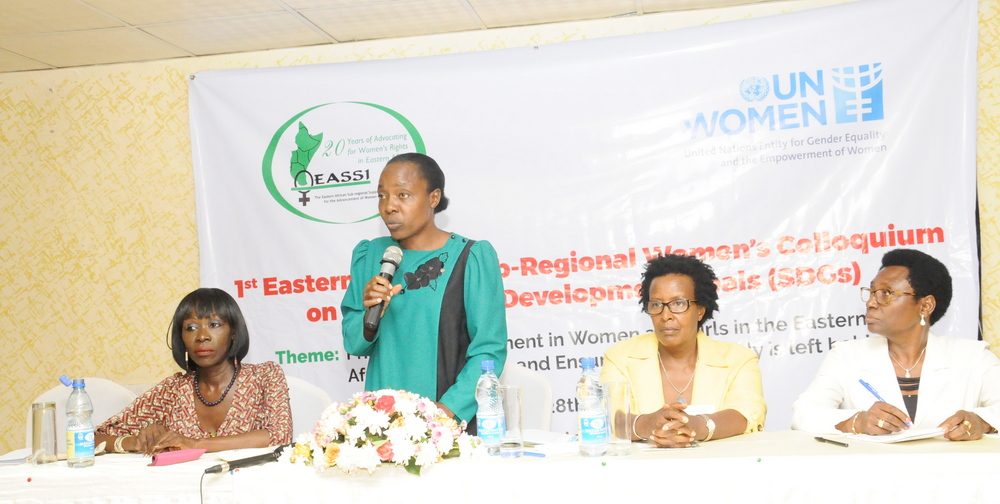 SDGs, The first ever Eastern African sub-regional women’s colloquium on Sustainable Development Goals was hosted by the Eastern African Sub-regional Support Initiative for the Advancement of Women (EASSI) in partnership with UNWomen on 27th and 28th November 2016. It was held under the theme  “Prioritizing Investment in Women and Girls in the Eastern African Sub-region and Ensuring that nobody is left behind”. EASSI, a sub-regional women’s rights organization, was founded in 1996 with mandate to monitor the implementation of the African and Beijing Platforms for Action.

The overall objective of the Colloquium was to bring together national and international policy experts, women’s organizations, academia, and other key bodies to identify innovative ways of promoting the achievement of the SDGs and raise awareness on the Agenda 2030.

Specifically, the Colloquium aimed to:

In tackling the objectives, specific areas formed the object of focus both during the plenary and break-out sessions notably: Gender, governance and democracy; Banishing the hand held hoe to the museum by 2025 and increasing Women’s access to productive resources; Women’s participation in conflict resolution and post-conflict reconstruction;  Women/Girls in Science and Technology; Women’s participation in trade and entrepreneurship; Investing in women’s reproductive health and reducing maternal mortality, HIV/AIDS transmission and women’s cancers; Combating violence against women; Gender, climate change and development;  Women’s status in the work place; and Impact of taxation on women’s development.

Following an in-depth review of the BPfAs and the strategic actions for engendering the SDGs implementation, the Colloquium resulted into fresh commitments by development partners and civil society organizations in their lobby and advocacy efforts that target women and girls’ empowerment. It was also an opportunity for EASSI to gain new information and knowledge to guide its focus and mandate, twenty one years after the Beijing declaration. The outstanding outcome of the Colloquium was the Communique titled Kampala Declaration on Women and the Sustainable Development Goals in East Africa and the Horn. This calls out; proactive policy advocacy, awareness raising, mobilization, gender responsive media engagement, economic empowerment, capacity enhancement and evidence building as the overall key actions for all stakeholders in the move towards gender equality.

KAMPALA DECLARATION ON WOMEN AND THE SUSTAINABLE DEVELOPMENT GOALS IN EAST AND HORN OF AFRICA , OCTOBER 2016

Key message:  Prioritize Investment in Women and Girls in the Eastern African Sub-Region and Ensure that “Nobody is left Behind”

For more info, go to Our Causes, EASSI Publications or Our Impact