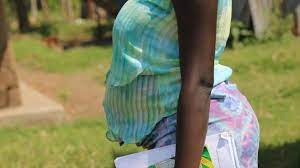 In Uganda adolescents constitute over 9 million people, which is a quarter the population. For the majority of adolescents, life is really harsh. Poverty, coupled with HIV/AIDS; early marriages; teenage pregnancies; Gender-Based Violence, negative cultural practices and low levels of education, all make it difficult for young people to develop their full potential.

In particular, adolescent girls face multiple and unique vulnerabilities. They are severely and unevenly at risk of HIV infection. Adolescent girls are reported to comprise two thirds of all new HIV infections rates. Majority are school drop-outs as a result of unintended teenage pregnancy and forced early marriage.

In the first COVID-19 lockdown in March 2020, Acholi sub-region in northern Uganda, comprising the districts of Amuru, Nwoya, Kitgum, Pader, Gulu, Lamwo, registered more than 17,652 teen pregnancies and child marriages. The culprits took advantage of the closure of schools and economic hardships arising from the lockdown to sexually exploit and abuse young and adolescent girls.

With the hope of returning to school after the lockdown, 13-year-old Lillian Akello (not real name) went to stay with her paternal uncle, Jeff, in Pabbo town council, in Amuru district. Jeff, the bread winner of the family was a widower, who lost his wife in 2006 as a result of HIV/AIDS.

One fateful evening, the unsuspecting Lillian was summoned into her uncle’s bedroom to serve him food. She was grabbed and sexually assaulted throughout the night. Jeff threatened Lillian, not to tell anyone or else she would be ostracized from the family. Without any knowledge about the different referral Gender Based Violence pathways, she obeyed her uncle and kept the horrific ordeal to herself.

As a victim of sexual assault and incest, Lillian was terrified of the social stigma. She was not sure of what would happen to his uncle, on whom she depended for survival, if she reported the matter to the police. Silently she prayed that this nightmare would pass.

Two months later she suffered what she suspected to be recurrent malaria and sought treatment at a nearby health centre. It came as the worst nightmare when Lillian was told that she was pregnant. She had now got another secret to keep.

As months rolled by, the pregnancy begun to show. The guilty uncle became more abusive, both verbally and physically. With a few weeks to her delivery date, Jeff chased Lillian out of his house. Caught between a rock and a hard place, she decided to report the matter to the police.

According to the Uganda Penal Code Act, defilement is considered aggravated if the girl is under 14 years old; the offender is the victim’s parent or guardian; the girl has a disability, the offender has HIV/AIDS or is a serial offender. Defilement carries a maximum penalty of death.

Following her report to the police, Jeff was arrested but because of his social influence he was briefly detained and then released, allegedly due to lack of ample evidence. Terrified of the repercussions from her uncle and extended family, Lillian tragically committed suicide, taking her own life and that of the unborn baby.

According to the Ministry of Health, 25 per cent of Ugandan teenagers are impregnanted by the age of 19. Close to half of all adolescent girls are married off by their parents before their 18th birthday and they continue having babies into their mid-40s. Complicated births and abortions, often requiring emergency obstetric care, are all too common among adolescent girls. Many teenage mothers are unable to access health care facilities and die in the process of bringing forth new life. Uganda has one of the world’s highest maternal mortality rates, with 18 mothers dying every day due to pregnancy related complication, during or after childbirth.

An Action Coalition on Bodily Autonomy and Sexual and Reproductive Health and Rights (SRHR) was formed following the Generation Equality Forum that was held in Paris, France, in July 2021. The coalition calls upon governments and other stakeholders to ensure the provision of Comprehensive Sexuality Education (CSE) and rights education so as to contribute to the elimination of gender-based violence and harmful practices, including Child/Early and Forced Marriages and Unions (CEFMU), Female Genital Mutilation (FGM) and child sexual abuse.

In Uganda, where teenage pregnancies and early marriages remain as tragic as COVID-19, there is need for concerted efforts to advocate against all social and gender norms that foster patriarchy, unequal power relations and toxic constructions of masculinity that shape broader household, community and social practices. These negative social constructs solidify the barriers against people’s ability to seek Sexual and Reproductive Health (SRH) services and exercise bodily autonomy and sexual and reproductive rights.

The Action Coalition on Bodily Autonomy and SRHR is pushing for the improvement of access to quality primary health care and Universal Health Coverage that includes SRH services. These services include menstrual awareness and health, choice of voluntary male- and female-controlled methods of contraception, and safe abortion and post-abortion care and services, without requiring third party consent.

Under the Coalition, efforts will be made to strengthen the legal and policy frameworks by aligning CSE with international guidelines and incorporating it in the national education curricula. The Coalition will also work hard to make CSE compulsory, from early childhood education through to university and also ensure girls and adolescents have equal access to inclusive education, free from limitations related to disability, marital, pregnancy, or childbearing status.