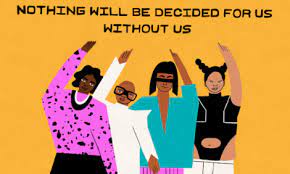 Today women are organising locally and nationally and are networking across the African continent on an unprecedented scale. They are on the frontlines, paving the way to gender equality and women’s rights. In Sub Saharan Africa, women are taking their claims to land, inheritance and associational autonomy to court in ways not seen in the past.

Women are also challenging laws and constitutions that do not uphold gender equality. They are fighting for female presence in areas where women have been marginalised for generations. Yet, in the face of rising demand for their services, feminist movements are struggling to receive financial support. Despite increased funding commitments for gender equality in recent years, funding for feminist movements has decreased with only 1% of gender equality funds reaching women’s rights organisations and feminists’ movements in the global South.

Women’s rights organisations and feminist movements have the knowledge to provide solutions to the challenges women face in their communities and the expertise to decide how resources are used. With flexible, unrestricted funding, women’s organisations can be able to determine their agendas, respond to changes, seize opportunities, and cover their operating costs. “Any decisions made without them are not truly made for them,” activist and founder of youth collective, Tremendas Julieta Martínez, asserts.

There is need to have a mindset shift for donors and move away from strict accountability mechanisms that put more emphasis on financial compliance as opposed to impact and trust building. The increased flexibility and minimal reporting requirements of the fund means that women’s rights organisations will have more time and resources to use their expertise to do what they do best, that is, challenging systems of oppression and advancing women’s rights.

There has been ongoing advocacy calling upon donors to provide flexible funding to feminist movements and activists in the Global South in order to have more resources for their rights advocacy work and organisational sustainability. It is imperative that donors and development partners listen to and trust the leadership of feminist movements because they are close to the problems and are able to provide the solutions. Women’s Movements know what they need and must determine where and how resources are appropriated.

During the COVID-19 pandemic, governments pledged funds for the response and recovery initiatives and yet women’s rights organisations and feminist movements that are at the forefront were not meaningfully engaged or consulted in solutions or supported with resources. Gabriela Bucher, Executive Director of Oxfam International has noted that “Donors and governments need to wake up to the crisis that women’s organisations are facing and invest in them. Their networks provide support to millions of women and girls as we’ve seen more than ever during the pandemic. By backing them, governments can truly live up to their promises to promote gender equality in the post-COVID recovery.”

It is also important to support feminist movements in creative ways such as social change that has many dimensions and entails many entry points for resourcing holistically. Supporting women’s organisations with a broad range of resources such as digital security, collective and individual care, healing justice, and other intangibles will help to sustain their organizing for the long haul. It is paramount to provide core, long-term and flexible funding to enable feminist movements carry out sustainable and impactful work.

The Coalition on Feminist Movements and Leadership Action, which was launched at the Generation Equality Forum (GEF) in Paris in July 2021, has developed a Global acceleration plan to advocate for increased funding to feminist organizations and movements and to urgently address and significantly reduce existing systemic barriers that hinder women from active leadership. Commitments are great, but now is the time for action. Donors must engage feminist movements as equal partners and build a coherent feminist funding ecosystem that unlocks resources for gender justice.

The Coalition has noted the need for institutions to practice accountability for their commitments to gender equality, justice, peace and human rights, this will ensure that funds committed for gender equality will trickle down to grassroots organisations, working with and for young women, in particular the young women-led organisations in the global south.

The Coalition would also like to deepen solidarity within feminist movements and across social, racial and eco justice movements; integrate intersectionality as a central approach, and to act on the demands of young feminists in order to have youth-friendly and youth-led decision-making spaces. The Coalition has also committed to practice feminist principles and feminist leadership, shifting and sharing power with historically marginalised groups and people.

EASSI endeavors to work with vulnerable and marginalised populations, towards promoting gender parity in all decision-making spaces. As part of the feminist movements, EASSI is committed to the Global Acceleration Plan for Feminist Movements and Leadership and call upon all stakeholders to: