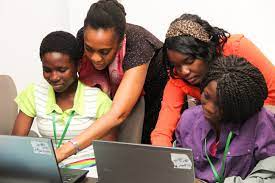 Forget Ideology, the World’s Next Great Divide will be Digital and Highly Sexist

When we think about the future, we have to think digital space, technology and its application.

As mobile phone penetration grows, so does our dependence on mobile network platforms for our daily transactions such as buying goods, paying utility bills, sending money to family and accessing credit—the biggest factor of economic growth.

Our world has radically changed in the space of two decades and it is now incomprehensible without mobile phones.

Japan is synonymous with technology and innovation, such that technology is ingrained in everyday lives.

In 2020, Japan will be hosting the Olympic Games, and the organising committee has decided to produce all the medals to be awarded at the Games from recycled metals extracted from smartphones, cameras and laptop e-waste.

People around the world are encouraged to participate in the recycling project by donating their e-waste for the extraction of gold, silver and bronze needed.

But with this technological advancement, there is also the issue of the digital divide. This is in the form of access to technology as it evolves in the first world and trickles down to the developing; then the divide between men and women, which surprisingly is also present in the developed world.

For example, Masami Katakura the managing partner Ernst and Young Japan says statistics show that use of the mobile phone is 10 per cent less for women compared with that for men in Japan.

That the percentage of women with degrees in IT is only seven. This, in the face of having 60 per cent of the world’s economies being digitised by 2022. Digital economies are going to be the norm rather than the exception.

So, what are governments around the world, but especially in Africa doing to make sure that our societies are equally prepared for this future? Are our education systems preparing future generations for what awaits them in the rapidly unfolding future?

Are the cultures of many organisations’ promoting investments in technology?

In Kenya, county governments are struggling to keep their websites updated, oblivious that many young people consider it their first stop for data and information.

While the national government has a public service delivery portal, citizens hardly utilise it because simple information on health, drought, disease outbreak and what actions to take as citizens is missing.

There is hardly any day-to-day relevant information that can inform citizens for the sake of planning or offering assistance.

Meanwhile, a world away, Japan takes certain measures such as having Wi-Fi in public transport a matter of national importance. The government is using resources to limit the information divide across the populace.

Internationally, large companies such as HP have 45 per cent women board membership to bridge the gender divide. This is for diversity of ideas and innovations that can cater to an array of the population.

According to Heather Barnabe, statistics show that 40 per cent of women receive threats online, ranging from rape threats to body shaming by way of sharing of indecent photos online.

Many are bullied and quit their online presence. A current survey distributed by Girls20 shows that online safety is a major issue for many women.

About seven percent of global leaders are women and 24 out of 500 Forbes companies globally are led by women. Yet there is a lack of gender representation when we talk about skills.

But given a chance, young women have proved to be just as innovative as their male counterparts.

In Kenya, a group of high school girls have developed an app that provides teenage girls who are in danger of FGM with a platform to access rescue centres.

All of these inventions are proof that access is a key foundation to digital inclusion.

Ahead of hosting the National World Breastfeeding Day commemoration slated for tomorrow Thursday 18th August 2022, today we had Regional Social Accountability health dialogue on Reproductive, Maternal, Newborn and Adolescent Health including Nutrition and WASH at Golden Gardens Masafu Town Council under the theme “Better accountability and Coordination for RMNACH and WASH - The journey so far” Officials from Ministry of Health- Uganda , Organizations and District Local Governments made presentations on interventions that yielded into plans leading towards collaboration, service inclusiveness, engagement and continuous improvements in the highlighted areas. The dialogue did not leave the children behind especially the children’s parliament which tabled issues to the leaders present and made a statement to which the leaders present made commitments by signing on a commitment board. #worldbreastfeedingweek2022 World Vision Uganda. Busia Area Communities Federation ASHWAAfrican Youth Development Link (AYDL) Youth Environment Service Jitoleze Foundation Forum for Women in Democracy Somero Uganda Uganda Youth Coalition on Adolescent SRHR and HIV - CYSRA-Uganda ChildFund Uganda EASSI Eastern Africa Sub region Ipas Uganda Youth and Adolescents Health Forum - UYAHF ... See MoreSee Less

#IYD2022 #EASSIregionalThe theme of this year's International Youth Day is "Intergenerational Solidarity: Creating a World for All Ages".We have to work #together to break down any barriers to an equitable, just, and inclusive world so as to achieve the Sustainable Development Goals #SDGs.#EASSIgender ... See MoreSee Less

It can heighten risk of obstetric fistula, complications giving birth and newborn mortality, not to forget the impact on psychosocial health of women and girls.

Almost all girls who have undergone FGM experience pain & bleeding as a consequence of the procedure. it is traumatic & painful. Risks & complications increase with the type of FGM & are more severe & prevalent with infibulations.
Save a girl & #stopFGM: https://bit.ly/3aza8hf

Young people are full of hope and through innovation and imagination, they are problem solvers and have a great potential to generate positive social change in the world.
#powertoyouth

The current digital gap between young and older people can offer an opportunity to enable more significant interactions and inter-generational cohesion. How can we use social media activism to ensure we advocate for a seat at the table amidst shrinking civic space?