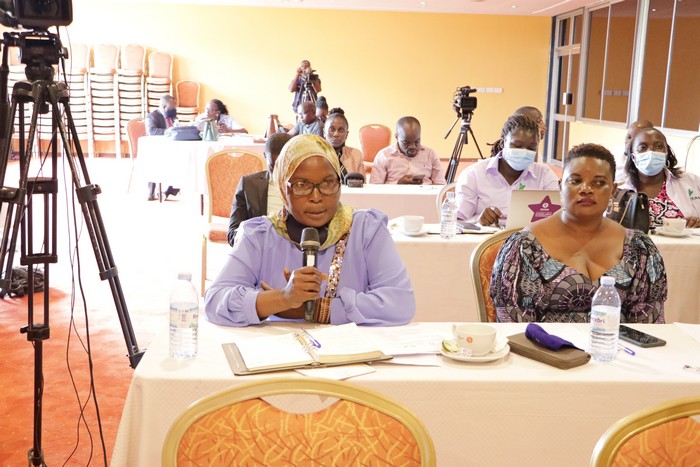 EASSI with support from GIZ-EAC-IIDEA organized a Regional Policy Dialogue on Enhancing Participation of Women Traders in the African Continental Free Trade Area (AfCFTA). The event, which transpired on 7th July 2022, brought together over 105 participants online via ZOOM, 32 at the venue of Kabira Country Club Uganda, and moderated by Mr. Charles Mwanguhya.

The African Continental Free Trade Area (AfCFTA) was launched in January 2021 as the biggest Free Trade Area in the world, bringing together Africa’s 55 countries, with an expected, combined Gross Domestic Product of around $3.4 trillion. The Free Trade Area envisages free access to goods, services and labour across the continent through the creation of a single liberalised market. The AfCFTA aims at reducing tariffs among Member States and covers policy areas such as trade facilitation and services, as well as regulatory measures such as sanitary standards and
technical barriers to trade.

The AfCFTA also aspires for sustainable and inclusive socio-economic development, gender equality, and structural transformations. Women Cross-Border Traders (WCBTs) are among the expected beneficiaries of the AfCFTA, who need to take advantage of the wider trading opportunities and markets, as well as the gender equality ideals entrenched in the agreement. AfCFTA is anticipated to further boost women’s economic empowerment across the continent.

During the regional policy dialogue, MS. Joyce Kevin Abalo, Senior Advisor Incubator for Integration & Development in East Africa at GIZ informed the participants that GIZ-EAC’s support to EASSI on the project “Positioning Women Cross Border Traders to Seize Opportunities in EAC and the AfCFTA” had built the capacity of one hundred (100) government officials from EAC Partner States of Tanzania, Uganda, profiled 100 women cross-border entrepreneurs ready to tap into AfCFTA, conducted a gender analysis of regional and continental trade policies and laws to inform advocacy for policy review, reform, and development at regional and continental levels and created awareness of opportunities available for women and youth entrepreneurs in AfCFTA.

During the panel discussions, Ms. Mariam Babu – Chairperson Busia WCBTs Cooperative called for the harmonization of policies in the East African region, noting the need for inclusion of the disabled in terms of the design of the One Stop Border Posts (OSBP) who faced difficulty in accessing the premises. She noted that the AfCFTA needed to consider people living with disabilities.

MS. Jane Nalunga, Executive Director of the Southern and Eastern Africa Trade, Information and Negotiations Institute (SEATINI) shared that the #AfCFTA protocol would be a tool that would help position Africa globally in terms of negotiating in the very competitive economy.

At the end of the dialogue, the Policy Brief was launched, together with a document on the profiles’ compilation of 30 women traders from Six East African Countries exploring opportunities in the African Continental Free Trade Area.