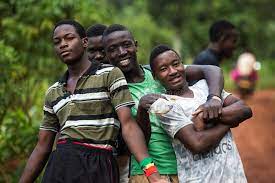 At the age of six, Adoli lost her father. Her mother gave Adoli to another family as she struggled to take care of her three other children. As Adoli grew up, her adoptive family refused to send her to school and insisted she worked for them at home. At the age of 11 she fled home.  As she searched for where to go, she met someone who offered her a job as a housemaid.

Unfortunately, the situation was not as she expected. Adoli’s employer was an old man in his 40s who repeatedly assaulted and raped her. “I begged him not to do this but he refused and threatened me not to tell anyone. After some months, I started feeling strange and told a woman who was staying next to us. She suspected I might be pregnant. I was so afraid and I did not know what to do.

The next day I told him and he kicked me out of the house and even changed his location. I tried many ways to abort the child but they all failed. I spent five months on the street eating garbage. I then decided to go back to my mother and she rejected me after hearing my story” Adoli narrates.

At 9 million, adolescents comprise a quarter of the population in Uganda. Yet life is harsh for many. Teenage pregnancy, poverty, HIV and AIDS, early marriage, Gender-Based Violence and low levels of education make it difficult for young people to fulfil their potential. Complicated births and abortions, often requiring emergency obstetric care, are all too common among adolescent girls.

More so, many teenage mothers do not have access to adequate reproductive health care and die while trying to give life. Uganda has one of the world’s highest maternal mortality rates, with 18 mothers dying every day in pregnancy or during and after childbirth. The traditional practice of child marriage and female genital mutilation/cutting (FGM/C) also persists in many communities.

According to the Ministry of Health, 25 per cent of Ugandan teenagers become pregnant by the age of 19. Close to half are married before their 18th birthday and continue having babies into their mid-40s. In 2013, Uganda ranked 16th out of 25 countries with the highest rate of child marriages. In the Pokot community in Amudat district (Karamoja), almost all girls (95 per cent) have been cut to make them more ‘marriageable’. Both practices are devastating for girls’ physical and mental health.

Education is one of the best ways out of vulnerability and poverty and yet majority of girls have got no access to secondary education in Uganda. Only a fifth of adolescent girls are enrolled in secondary schools. In addition to teenage pregnancy child marriages, sexual and gender-based violence and lack of school fees are key factors that keep adolescent girls out of school. Instead of having protective and safe learning spaces, many girls face sexual harassment and rape in schools.

A study on gender-based violence against children in Acholi and Karamoja in 2013 found that the majority of primary and secondary school children had experienced sexual abuse.  Most school girls were abused by a male teacher. Bullying and caning are also prevalent, despite corporal punishment being outlawed in schools.

The COVID-19 pandemic has impacted all aspects of life in Uganda. The lockdown of the economy, school closures, loss of jobs, and disruptions in access to health and social services has greatly affected adolescent girls and young women. A total of 354,736 teenage pregnancies were registered in 2020 and 196,499 in the first six months of 2021. The numbers could even be higher, since many cases could be unrecorded.

Angela Nakafeero, the commissioner in charge of Gender and Women’s Affairs at the Ministry of Gender, Labour and Social Development attributed the increase of teenage pregnancies to negative social norms, beliefs and practices. Nakafeero said that during the lockdown, some cultural norms like Female Genital Mutilation (FGM) that prepare girls for marriage increased since children were out of school.

Children experts and religious leaders stipulated that more needed to be done to address the issue of teenage pregnancies as schools prepared for the reopening in January 2022. Jessica Nsungwa, the Commissioner in Charge of Maternal and Child Health at the Ministry of Health said both female and male teenagers need reproductive health knowledge to be able to bring down the numbers.

“We pay a lot of attention to the girl child but the boys are left out. The boys who at times responsible for these child mothers or brothers to these girls are left out. They are not talked to about such issues. I think we need to change this. The boys need to know more about their sexuality and the effects of teenage pregnancies,” she said.

The Government of Uganda has put up a number of policies that should, in theory, be useful to reduce adolescent pregnancies including: setting the minimum age of sexual consent at 18 years; the defilement law against having sex with a girl under 18 years; Universal and Secondary Primary Education that offers free elementary and secondary education to children; and the National Adolescent Health Policy. However, these policies do not seem to have much effect due to lack of enforcement and lack of knowledge about the policies by the general public.

Uganda is among the 16 African governments that have submitted its commitment of 577 million USD to Generation Equality. The commitment has been applauded as a positive step towards eliminating early teenage pregnancy and promoting women’s economic justice and rights in Uganda.

In order to end early teenage pregnancy, EASSI is appealing to the Ugandan government to ensure that the legal frameworks already in place are strictly implemented in the parts of the country most affected. Parents need to start parenting and looking after their children instead of leaving them for vultures.

As a women-led organization, EASSI is known for its strong campaigns on gender equality and women’s empowerment and advocacy on Female Genital Mutilation (FGM) including understanding on dealing with cross-border FGM issues. EASSI is implementing a project, “Power to the You(th)” to help create a safer future for adolescent and young girls in Uganda and also empower them to claim their rights, address gender inequalities and challenge the negative gender norms.

Power to You(th) is a five-year program (2021-2025) whose overall strategic program objective is to contribute to more adolescent girls and young women from underserved communities to meaningfully be involved in all decision-making, regarding harmful practices, sexual and gender-based violence, and unintended pregnancies by strengthening the role of young people, community leaders, religious and cultural leaders, teachers, health workers, police policymakers, men and boys in women’s health and empowerment.